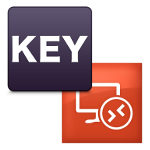 Between OS X El Capitan (10.11) and Sierra (10.12) the keyboard driver has been completely changed by Apple. The Karabiner tool that allowed us to act directly at the driver level have been completely rewritten by Takayama Fumihiko for now two years. The new name of this application is Karabiner-Elements.

Karabiner-Elements is stable even if we do not yet find all the features of the previous version. Moreover, it is a “rewrite from scratch”: the main concepts remain, but everything else has changed. Finally, according to the developer, a set of features will no longer work as before (power button, ejection, Touch Bar …) because of deep changes in the management of these keys in the OS (but those should not concern us so much).

I have prepared for you a new configuration file that allows for French Apple keyboards to use Microsoft Remote Desktop App ® (including the beta version) pretty much correctly. Its goal is to produce the expected result for all the symbols drawn on the keyboard (at least mine, a 2012 A1243). The concepts to identify the keys remain the same as those developed in my previous article: Mac: To finish with the keyboard problems of Microsoft Remote Desktop App. On the other hand, the new version distinguishes between the main types of keyboards: ISO, ANSI and JIS. Note that in France, keyboards are predominantly ISO. Thus we are looking, to go from an Apple ISO keyboard to an ISO PC.

To exploit this new configuration, just get the latest version of Karabiner-Elements. In the Complex Modifications tab click Add rules, then Import more rules from the Internet. In the window that opens select in the section International (Language Specific): Microsoft Remote Desktop for Mac French Keyboard, then add the symbols you are interested in (all in once or one by one). In the same way, I add a specific swap left cmd and ctrl available also for the beta version.